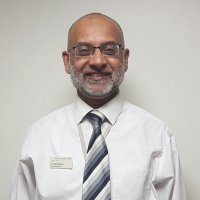 In July 2002 Dr Akbani took up the post as Consultant Physician and Nephrologist. He is actively involved in research projects, mostly commercial studies. He has acted as Principal investigator and sub investigators in a number of studies. Many of them have aleady finished and published. Currently he is PI/SI for more than 10 studies running on the renal unit. He has presented at national and international conferences and has published papers in peer reviewed journals.