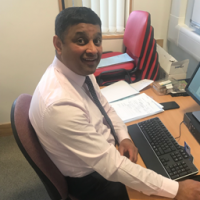 Dinesh is currently a Consultant Respiratory Physician, Associate Medical Director at Bradford Teaching Hospitals NHS Foundation Trust and Associate Director for Research at the Bradford Institute for Health Research (BIHR) since 2014. He is also Honorary Senior Lecturer at University of Leeds.

In 2009 Dinesh established the Respiratory Clinical Trials unit at the BIHR. This unit has grown to become one of the largest self-funded respiratory clinical trials units in the UK. He has been the chief co-ordinating investigator in the UK for several multi-national phase 2 & 3 severe asthma and COPD trials. The Unit has recruited several Global first and European first patients into these trials. The unit attracts patients for its Clinical Trials Programme from across the region. The unit has well established links with all major pharmaceutical companies as well as clinical trials organisations

In 2016 Dinesh was awarded the best Principal Investigator award for the UK for his delivery into the commercial respiratory research portfolio by NIHR. In 2016, Dinesh was appointed the National Industry lead for respiratory medicine at NIHR. Between 2014-2016 Dinesh was the clinical divisional lead, for division 6 at the CRN: Yorkshire and Humber.

Dinesh was appointed to the role of Associate Director of Research at the Bradford Institute for Health Research in 2014. Since his appointment he has been able to grow the Commercial research portfolio at the BIHR to over 1.25 million pounds. The unit has now moved to a brand new facility under the stewardship of Dinesh and has enhanced research in several new areas in the trust.

In 2016, Dinesh was also appointed to the role of Divisional Clinical Lead for Industry at the Yorkshire & Humber Clinical Research Network. He works very closely with the national and regional coordinating centres to grow commercial research in the region and nationally.