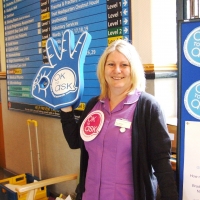 Ruth Started work at Bradford in Vascular Surgery as a Staff Nurse in 2001. She became the Vascular Research Nurse in 2005. In 2007 she moved to PCU/21 and worked as Senior Staff Nurse and Practice Development Nurse, honing her organisational skills. In 2008 she started work with the YSRN as a Stroke Researcher in Neuro Surgery based in Leeds. In 2009 she combined Neuro Surgery, Neuro Radiology and Stroke Research. From Leeds she transferred to Bradford  in January 2013 to focus on Stroke Research. Currently working on ward 6 Acute Stroke and Rehab as Stroke Research Lead Nurse. Ruth has worked hard to build the team and a varied portfolio of trials that cover the Stroke Patients pathway.

Ruth expanded the Stroke Research team in November 2015 so high recruiting trials could be run at Bradford. Stroke recruitment consistantly exceeds targets. Ruth brings a great work ethic, and believes that all patients have the right to be offered the opportunity to join a research trial.  She uses a positive screening tool that she created to capture all patients that are admitted for stroke care.

Ruth says ‘Working with the Research team at Bradford is very rewarding. We have great support from our Consultant PI’s. We are collating the evidence to drive patient care forward. Our great recruitment is down to the dedication of our team and the Stroke Unit’s staff, who want to deliver the best evidence based practice when caring for Stroke Patients. Thus, all the staff support research initiatives’.

Ruth has been involved with research promotion at Bradford both for the ‘OK  to ask’ campaign and locally for each specific trial.