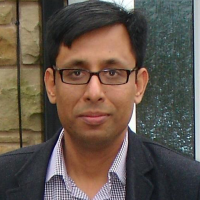 Dr Bansal graduated from The Tamil Nadu Dr MGR Medical University in coastal city of Chennai (formerly called Madras) in Southern India in 1999 following which he joined Delhi University for Post Graduate Medical Training at one of the India’s most reputed medical school called Maulana Azad Medical College. While in Delhi University he did research on ‘Pre-core mutations in HBV genome and its clinical significance’. This work was accepted by Delhi University for the award of degree of MD. After completing his post-graduate training at Delhi, he moved to UK in 2004 for Higher Speciality Training. He achieved his Royal College Membership in 2007 and was accepted for higher speciality training in Nephrology in Sheffield with the Yorkshire Deanery. During his higher speciality training (Sep 2007 to Sep 2012), he further enhanced his interest in research and actively participated in recruiting patients for ongoing clinical trials at Sheffield renal unit. He published three papers in peer-reviewed journals during his higher speciality training. After completing his higher speciality training, he was appointed as Consultant Nephrologist at Bradford Teaching Hospitals (BTHFT) in Jan 2013. Since April 2013, he has been Renal Research lead at Bradford.